Cleaning and garbage removal from the seabed of Thermaikos Gulf

The Region of Central Macedonia in cooperation with company INTERGEO Ltd, removed garbage from the bottom of Thermaikos.

As stated by the Deputy Regional Minister for Development and Environment of Central Macedonia, Kostas Gioutikas, «Our low tide revealed another garbage dump at the bottom of the sea. He confirmed to us that no matter how hard we try, no matter how many resources we have, our quality of life, public safety and the environment will be threatened by our indifferent and unconscious fellow citizens.

Immediately, Mr. Gioutikas came into consultation with company INTERGEO Ltd, contractor of the cleaning and remediation project of the west coast of Thessaloniki and organized the cleaning operation that started on Thursday, March 31, 2022.

On his part, the deputy regional governor Kostas Gioutikas stressed that: “We now give a clear view of the coastline of Thermaikos Gulf at the height of the lagoon of Kalochori, stopping the action as recklessly and unconsciously insist on polluting. I would like to thank once again the company INTERGEO Ltd that has undertaken the remediation work on the west coastal front, which was not in its conventional services and willingly continued in the decontamination of the area.

The operation was completed after five days of continuous effort and with significant difficulties in “detaching” tires of various dimensions from the seabed. The tires and all kinds of debris were transported to recycling units.

“We turn on ‘green’ in the environment, we put an end to degradation.” 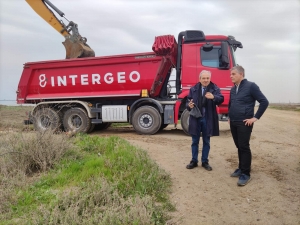 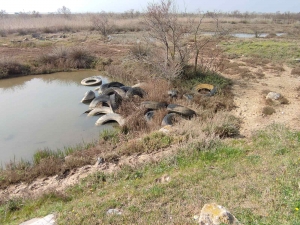 INTERGEO Attends the Showcase of the Autonomous Vessels of the INTCATCH Research...

Any cookies that may not be particularly necessary for the website to function and is used specifically to collect user personal data via analytics, ads, other embedded contents are termed as non-necessary cookies. It is mandatory to procure user consent prior to running these cookies on your website.